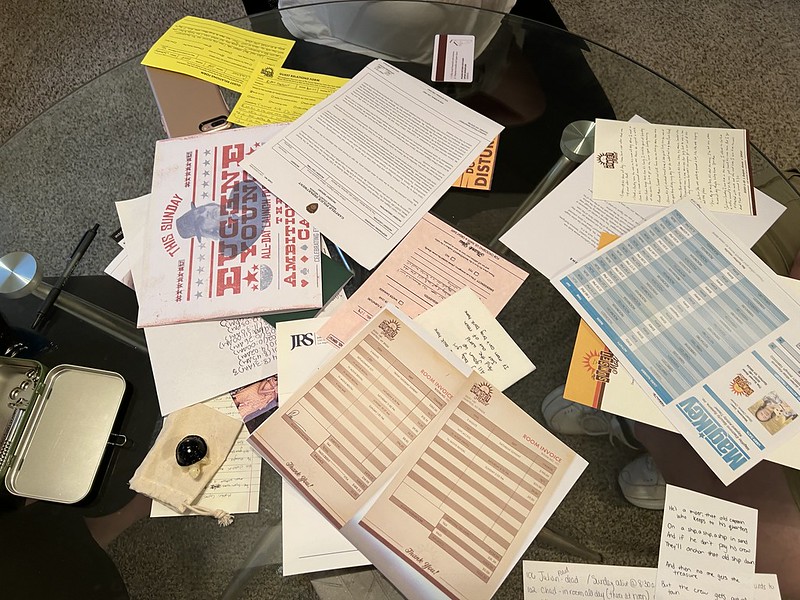 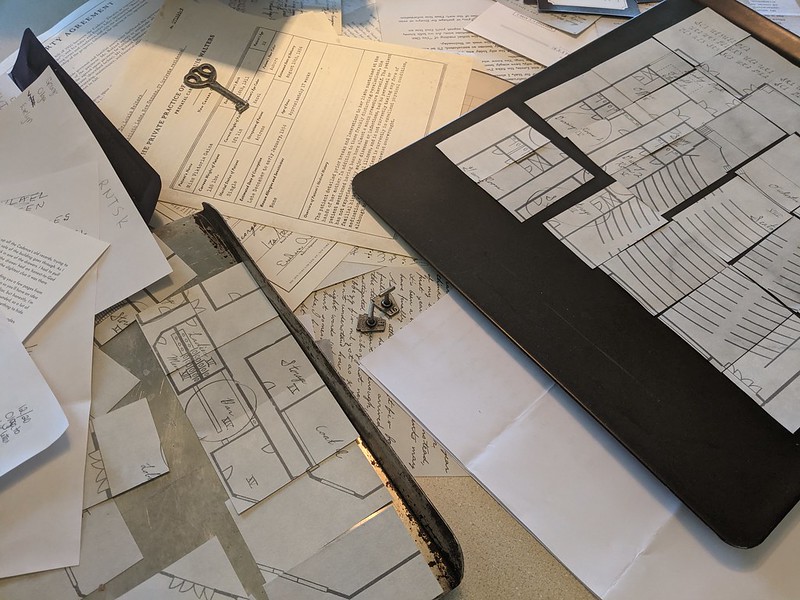 We (my mother and sister) spent four days working on the Hunt a Killer Curtain Call murder mystery. We pretty much were on a deadline to get this done today as I fly out tomorrow.

Episode 5 took us a bit. We had a suspect to eliminate pretty well in hand, but there was a lot of evidence. We began seeing how some stuff tied in with earlier stuff, so we spent a long time ensuring we had everything lined up.

Episode 6 too had some stumbles. It took us over three hours to complete. Again, we were able to eliminate suspects, but I thought the assuredness of one of them was not as solid as it could be. We pored over lots.

We had to reach back to previous evidence. Of course, with three people on the case, we had different ways of dealing with that. Eventually, we all agreed on who did it, why that person did it, and where the jewels were hidden.

And Hunt a Killer let us down. Our submission was rejected time after time. It was so bad, someone said, “Makes me not want to buy another game.” It was disappointing.

I got involved at that point. I wrote the company. No feedback on the weekend. I submitted. We were down to three suspects. All were rejected. Over and over I tried different things. Eventually, an alternate spelling and not submitting the location proved successful.

That helped bring back our smiles. I also began reading discussion boards online. This stumble is prevalent.

For dinner, we went to a dinner theatre, one I had been to 21 years ago. The buffet was actually better than I expected. I had plenty of beef and pork. I shied away from the fish and fried chicken.

We saw My Mother’s Italian, My Father’s Jewish, and I’m Home for the Holidays. This is a one-man show. Funny. He played the typical funny lines of Jews and Italians. He was not offensive. I thought the first set was uproarious. The second set wasn’t quite as electric for me.

The room was solidly white. The number of people who were younger than I could be counted on one hand . . . with a finger or two missing. 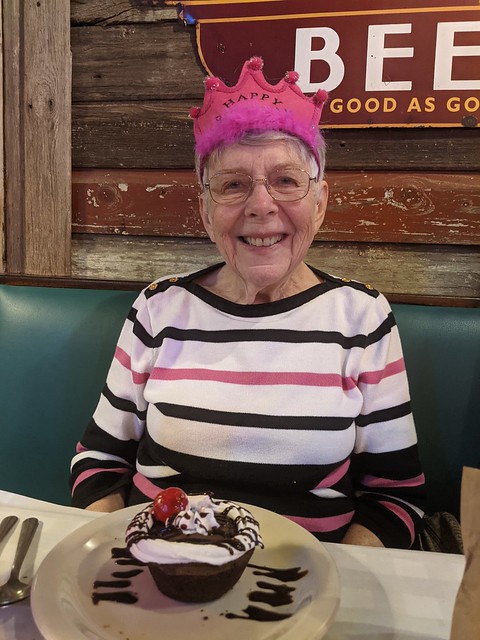 Last evening I flew to Florida to visit my mother. She will turn 81 this month. My sister and I have arrived to spend several days with her celebrating.

We began the day with presents: two bottles of Mission Spirits Heretic spiced rum (118 proof). We put up a banner and then spent the afternoon delving into Hunt a Killer.

Back in May for Mother’s Day, I sent Mom a subscription to this. Each month she received a box in which a murder and its suspects unfold. I thought it would be an interesting thing for her to work through. She found it complicated and not something she knew what to do. The three of us worked through the first two (of six) boxes. We like this! Yes, it’s better with three than it would be for one.

We broke for dinner. Since it’s Wednesday, we headed to Cody’s for two-for-one fajitas. Good times! Mom wore her Happy Birthday tiara. Lots of folks wished her a happy birthday. Cody’s purchased her a dessert. 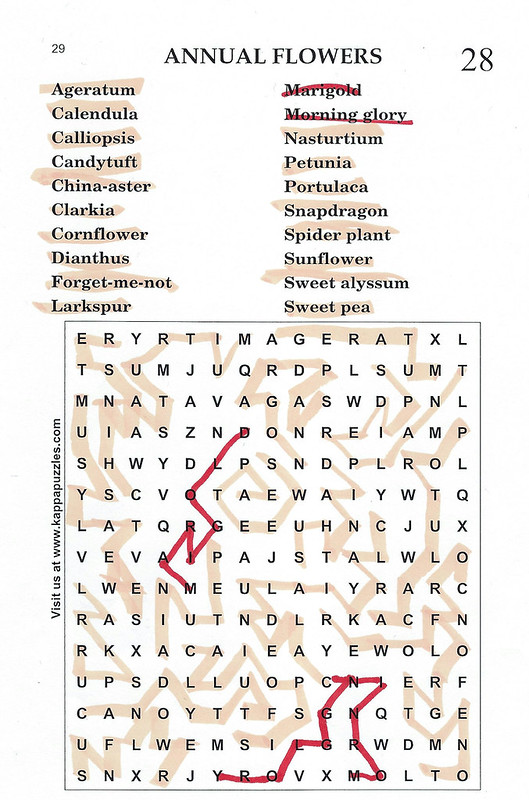 At grocery stores, puzzle books are sold. Several years ago I picked one up. It was a word search book. The words, however, were not in a straight line. Instead, they bent and wiggle. I liked these. They are amusing puzzles when you don’t want to think too hard.

Anyhow, I went looking for another of these recently. Could find one. Began searching online. It turns out, the Bent & Wiggle books are no longer published. It is now an online subscription service. No, I don’t want that many. I did find a sample puzzle, however.

I solved it. Fun.

So, I have been enamored with gadget caches for a while now. For me, it provides something more exciting than just a box at the coordinates. Location used to be the draw. It still is, but it doesn’t seem to be used as much these days by hiders.

Of course, my building skills are basically nonexistent. To that end, I have taken to watching a lot of YouTube videos on the matter, Gadget Talk in particular.

This is based off their first build more than a year ago. 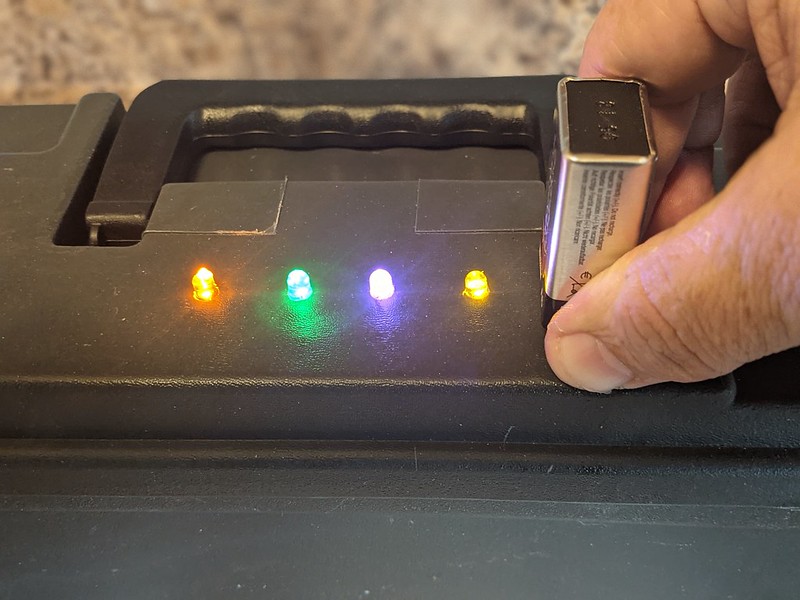 It’s a plastic ammo can from Harbor Freight. I drilled four holes for the LEDs and two for the screws. The LEDs are connected to the screws via two ring wire terminals that I crimped onto the wires. Using a 9-volt battery, electricity flows through the screws though the wires completing the circuit and lighting the LEDs. Simple.

So, four different colored lights illuminate. They are clear lights until illuminated. So, what does one do with the lights?

Well, this may be of help.


There are nine images here with the title Digital Root. Perhaps finding the digital root of the four illuminated LEDs would provide four numbers.

Hey, there’s a padlock on the ammo can with four numbers. Fancy that! 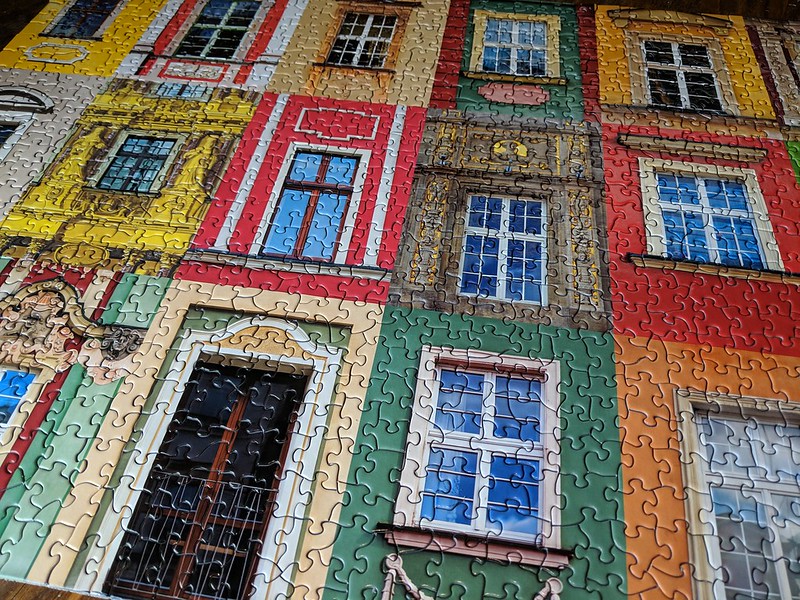 As a boy I recall jigsaw puzzles coming out. I know my parents solved some there in my childhood. I am sure I helped too.

But when I was thinking of these 50 Adventures, when I considered jigsaw puzzles, my immediate reaction was certainly negative. I am not exactly certain where that came from, but I do not have positive feelings about them. It’s odd in that I enjoy puzzles.

I believe it was when I was in sixth grade that my scores on the standardized test (Iowa?) came in that my father lamented the results on the spatial relations section. I didn’t even know what spatial relations were (and the test backed that up). My father produced some examples of pieces of paper with dotted lines. The idea was to be able to tell what shape the paper would be if one folded along the lines. Yeah, I didn’t have a clue. Seems to me you should let me fold the paper to figure it out.

Advance forward a couple decades and I was in graduate school to begin my teaching career. The very first thing I had to teach was to my classmates. We all drew our lessons from a basket. I selected an origami butterfly. It was then that I realized I struggle with origami because I don’t understand the images. I am definitely a text-based learner. (I did succeed in my lesson, however. Every night after work, I would sit at the bar and fold butterfly after butterfly out of cocktail napkins.)

I share the above because that probably explains my mood toward jigsaw puzzles.

We have some puzzles here at the house. I believe these are gifts we have received. None of them were opened. I asked my wife if I could solve one of them. She provided the go-ahead.

Well, this took a lot longer than I thought it would. I figured a good afternoon’s work would produce a completed 1000-piece puzzle. Hardly!

I began a few days ago. I got most of the border done. Then I took a day or two off. I came back to it on Monday and did a little more. Had all but two pieces of the border and a little bit more.

Yesterday I made progress. I got most of half the puzzle done save the windows in each building.

Today I really worked on this. What is undeniable is that the more you get done, the faster it goes. Fewer pieces to sort through is helpful.

This was a more difficult puzzle than I thought it would be. Many of the colors were close in shades and used in multiple parts of the puzzle. Or perhaps I just really am not good at this kind of puzzle.

Whatever, I finished . . . feeling accomplished! 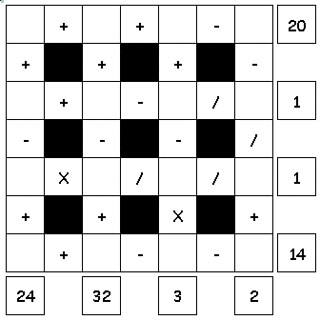 The other night I was working on my photograph project. It is really more than that as it is organizing, backing up, and otherwise preserving thousands of CDs of data. I stumbled upon the motherlode.

Long ago I used to have a web site for my classroom at another school. That site was very kewl. We did things there that folks aren’t doing even today. Anyhow, while I had some of that site, I knew I only had a fraction of what was there. I found the complete site! I have had fun re-living many projects from the 1990s.

One thing I have noticed, the photographs I took then were all re-sized and have not held up well. I recall working with the restraint of 25k as I didn’t want to overload people’s connections. Most folks used the telephone line in those days.

I had a dual model on one system in the classroom that permitted our weather station to act as a call-in station. We then set up all sorts of polls for the students to call in and respond. Then we used those data for analysis. Today one would simply put up a poll on a web site.

Anyhow, the above puzzle is one of the ones from that site. I now have new (old) work for this year’s students. 🙂 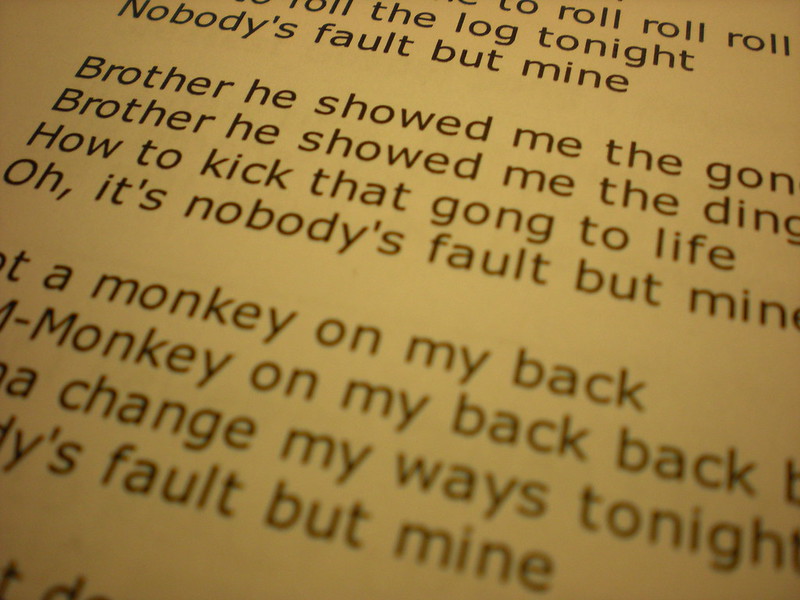 This puzzle is now archived.

I’m feeling better after 12 days of illness.  I’m still sick, but I am definitely feeling better.  So much so that I moved forward today with a 12 of 12 theme I had been wanting to do for a few months now.  Some folks create a theme of their photographs; this month all my photographs form a puzzle.  The images will render a set of coordinates.  Figure out where and follow the directions.  See if you can figure it out . . . it just may be fun.

You got to let the sadness rise on up.