Anyone who pays attention to getting his driver’s license in New Jersey knows that the license comes with the requirement to consent to a breath test if pulled over. I am reasonably certain that the process of obtaining a license is provided in a litany of languages.

Apparently, there is a wrinkle in the breath test requirement here in the Garden State. The officer must inform the driver that he is required by law to submit to the breath test or refuse. Refusal comes with an automatic suspension of the license and a fine.

Some guy who was driving impaired was told he must submit to the test. He does not dispute he was impaired, but he now says it is unfair for him to lose the license because he didn’t understand the police officer. He only speaks Spanish. The officer spoke in English.

This is nonsense. The driver knew at the time of licensing that he was responsible to submit to the test. The ACLU doesn’t expect one to remember his driver’s test. It states that non-English speaking folks are held to a higher standard. Please.

That he is drunk and cannot understand the officer is not a concern for all the other drivers on the road. Guess what? We expect this same non-English speaker to be able to read the road signs too! They are in English!

The New Jersey Supreme Court is taking this case under consideration. It should look at it and toss it claiming common sense is under attack here. Any other requirement is needlessly complicated.

I am not certain how I missed this, but I did. Almost three months ago this was produced.

I read Thayer’s poem yearly to my students and my children. There needs to be a shared culture for us to understand references. If one is unfamiliar with Casey at the Bat, this may be considered merely partisan. Make no doubt, it is partisan, but my interest in this is how wonderfully this remained true to the original while changing the subject. 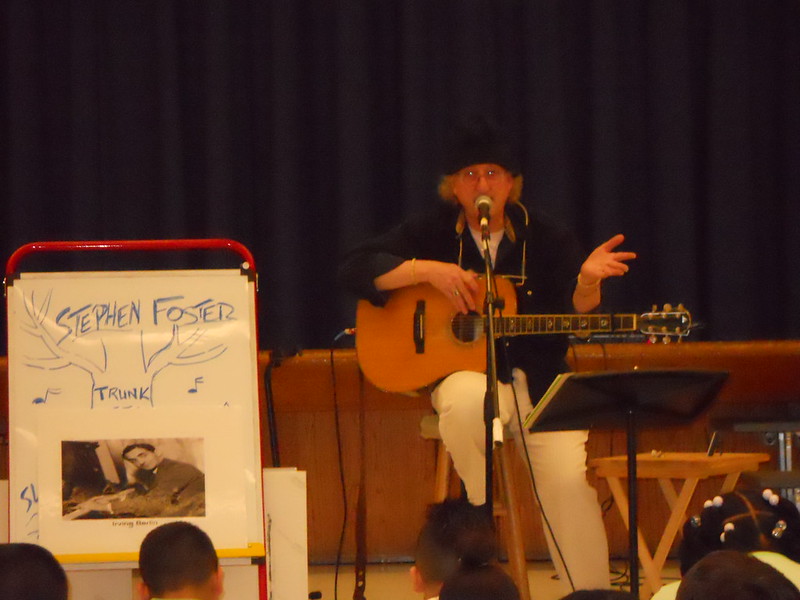 Today our school had Rex Fowler of Aztec Two-Step present an assembly. A History of American Songsmiths is Fowler’s program that teaches students about the history of American song writing. It was a very nice program.

Fowler began with introducing Stephen Foster, who he calls the trunk of the American songwriting tree. Then he sang Oh! Susanna. From there Fowler sang and discussed Irving Berlin, Woody Guthrie, Pete Seeger, and Lead Belly. God Bless America, This Land Is Your Land, If I Had a Hammer, and Goodnight, Irene all were played. Fowler has a wonderful voice.

Surprisingly, only the teachers knew these songs. And apparently I was the only one who was familiar with Goodnight, Irene. Sigh . . .

All these songs were written prior to my birth, so it isn’t exactly as though they were contemporary to my era.

Part of a society is a shared culture. It is interesting to note there seems to be less shared culture than I previously thought there was.

It’s a time-honored tradition: the older generation decries the state of knowledge of the current youth. I try to remind myself that I am just a cranky middle-aged man. Yet, I am finding that the shared culture that a society builds itself on is splintering.

This year I have found that my students do not know the story of Jack and the Beanstalk. More than half did not know who Hansel and Gretel were. Yesterday I read the book The Night Before Kindergarten to my class. It is written in the style of Clement Clarke Moore’s ‘Twas the Night Before Christmas.

‘Twas the night before kindergarten, and as they prepared,
kids were excited,
and a little bit scared.

It was painfully evident the class had never heard the original. How does that happen?

I was still married to my ex-wife.
I should have written more blues songs.