This is an interesting question in that I use that phrase. My first encounter with it, I believe, was Tiffani from Top Chef. She used that phrase all the time. It has stuck. As a matter of fact, I recall using it just yesterday.

For me, while the phrase is nothing to be proud of, it represents the understanding that I don’t need to worry about certain things. It’s just the way it is. As a government worker, I need that reminder often as government work can be so frustrating if one believes he can change the system.

I’ve tried. I failed. I had my career derailed. I have had a lot of negativity cast my way. I fought the system against all advice not to. After decades, I have acceded to the system.

With but limited time remaining in my career, “That’s just the way it is” is a reminder for me not to get tied up in the things I cannot change. I have other foci.

How would I know? I know nothing about you.

For me, it depends on the item. Currently, I am facing this with a bathmat. I purchased a really nice set of towels a little more than a year ago. Last evening when I removed the laundry, I noted the bathmat now has a hole in it. I am not pleased. The towels themselves are still plush and rich. What is going on with the bath mat?

It’s just a hole. I can easily use it. And I will.

But I am also planning on contacting the company regarding this. I feel as though this has run out far sooner than it should. Perhaps they will replace it. I would like that.

But, what if it doesn’t? I’ll probably toss out the $22.50 plus s/h to replace it. why? Everything here is brand-spanking new. It only has to last at most four years before I am out of here and starting all over yet again. Let’s keep everything in good condition. It’s more calming that way.

As someone who moved out of a filthy space, the apartment is the antithesis of that home. No dust. No stuff. No crud. No negativity. It’s fresh and refreshing. And while these things have not caused the happiness I now have in my life, they are reflective of the change from a dreadful living environment I was in. It’s a small price to pay for that peace of mind.

Once the bathmat is replaced, I will not be reminded of the negativity of the hole that I will look at daily until it is. 😉

Astor’s mother counsels Joey as to what is happening. She tells Joey that they are alike as they are outsiders to this rich lifestyle, but that Joey will get used to it.

To some extent, she does. She is eating the “meat”.

Although, Joey does seem bothered still (rightfully so). Another retirement party. Bump once again has to emcee. As Joey and Astor take a walk, a bloody Pip arrives and takes Astor away. It appears that Astor is needed in the killing. The mother once again speaks to Joey. She basically threatens her: you can eat or you can die. Joey has no choice.

I love the idea of reading a comic as it comes out, but I struggle with it. I had to reread the first two issues before reading this to remind myself of the goings on.

Not certain ow this will end in two issues in a satisfactory closing to this story.

I like the story and the art, but I am not overwhelmed by it.

View all my reviews

2) Check out other people’s trivia questions and answer one. Don’t guess at the answer, but instead research the trivia question and provide a link to where you found your answer. (Wikipedia is fine. This is for fun! However, if someone thinks a trivia answer is wrong feel free to correct it.)

Please only answer one trivia question, as we need to make sure there are enough for everyone to participate.

What is American bourbon, and why isn’t Jack Daniels bourbon?

The question I would like to ask is one I have asked since middle school. It’s not trivia, I suppose.

I am is a complete sentence. It consists of a subject (I) and a verb (am).

The contraction I’m is substituted for the words I am.

Why can’t this be a sentence? 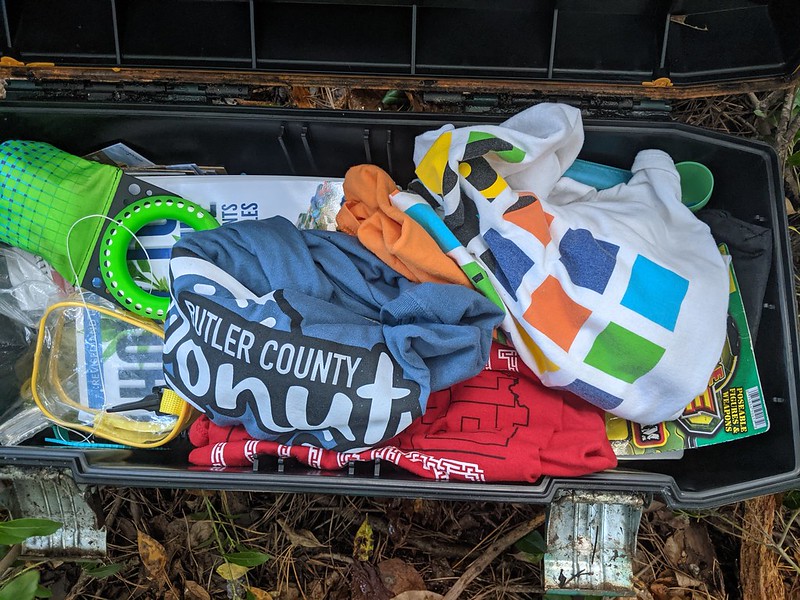 When I moved here 15 months ago, I laid out a framework for my things. I have written about how I have grown from that baseline. When I do, I note if I have stretched too far in any direction. I have then re-adjusted by offloading some stuff in whatever realm that may be.

As I took this on in more earnest of late. I have noted a few areas that have bothered me. Slowly and methodically I have dealt with the excess.

There was some stuff in the hallway closet that I finally decided to deal with. I gave some away to a geocacher. I sold some other stuff. I still had a small pile of stuff I just wasn’t using. It was geocaching stuff. I decided to gift that to a geocache.

Needing a large container, I decided to re-visit a cache I had previously found. It was a long way away. Serendipitously, my weekly Zoom was moved from tonight opening up a run after work. I found a geocache I wanted to complete a challenge before heading up to Lacey Township.

I have fond memories of that day. I added to the good vibes by dropping off the T-shirts, book, and kite. Good swag for the next few finders.

The reality, however. is that I have reset the framework. What was once maximum efficiency, is now more than I currently possess. It’s not that there is a competition; it’s just that I know I rid myself of stuff I was not using.

I know I could come up with a few other items. There will always be a few more items. What I can say is that there is no longer anything bugging me. The things I have, I use. I am comfortable with that. 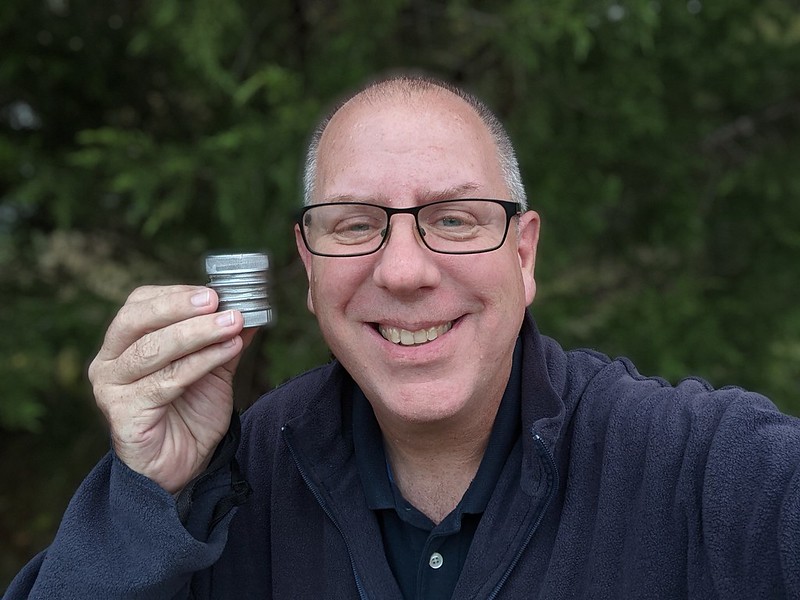 Felt like finding a geocache today. I was out this way and put this into Google Maps and navigated my way here. Elizabeth took me on a most circuitous route supposedly as the most efficient path.

Parked within seven feet of this. I found this with no issues. All is in fine shape.

Thank you kindly for placing this for me to find today; I appreciate it.

Recently I disabled Google from listening in on me. I thought that would help in protecting my privacy. I watch a lot of YouTube on my television. I do so without logging into my account.

I have not geocached much since July. But I did go out today. Facebook is now recommending all sorts of geocaching groups and posts I might be interested in. Damn! I haven’t even logged the cache I found today!

This does not please me in the least. I don’t want this much known about me. I suspect my “upgrade” will be a downgrade. It doesn’t seem to matter what settings I employ, websites know what I am doing. Maybe a dumb phone is needed here.

No clue. I don’t worry about renaming minimalism.

While I have lots of minimalistic tendencies and the term minimalism works well to help others relate a bit with where I am, I have never sought to be minimalistic. My desire was always to find more efficient ways of completing my work.

Eventually, that pursuit of efficiency led me to the minimalistic world. It’s not a stretch to see that if I had fewer items, more workflow would be streamlined, thus being more efficient. And that stage of my journey began.

In the end, however, while efficiency is still a goal, I think I’ve settled into the simple lifestyle landscape. It works with both efficiency and minimalism. I just removed everything save the necessities and the few luxuries that make me comfortable. I have plenty to keep me interested, engaged, and entertained. I don’t need new anything at this point. And while I recognize new things/pursuits will occur between now and my death, I absolutely expect that to come with the pruning of a current item. 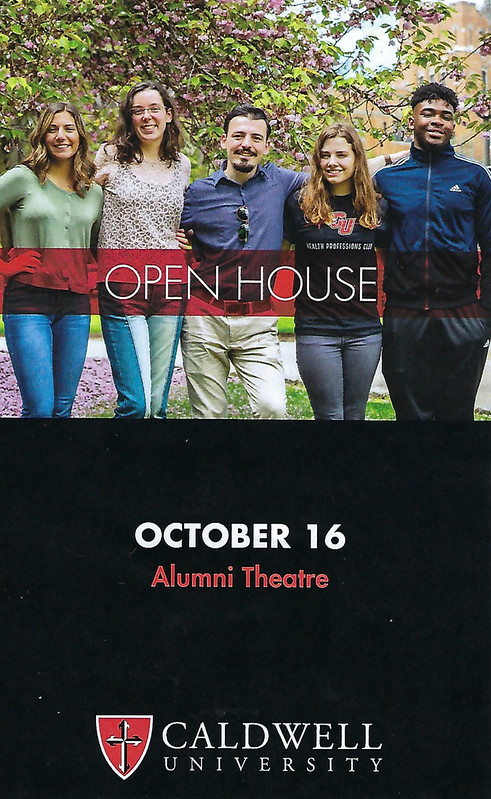 Last week Beetle asked if we would visit Caldwell University today for their open house. I had heard of Caldwell, but knew nothing about it until I did a little research and went to the open house.

It’s a small school, although about the size of Muhlenberg. The campus is smaller. There are four academic buildings and three dorms. Only 40% of the students live on campus. That is the one thing that stands out to me.

Other than that, this seems like a good school. The nursing program seems to be very good. Alas, Beetle is not interested in that.

The president and the admissions guy made a good case for Caldwell. Beetle is certainly impressed and has announced she would like to attend. They present the affordability issue well. Perhaps it could be finagled to work. It’s still a big price tag.

Fritz slugged along. Poor guy was looking forward to going to Edison’s lab, but our tour went so long that we didn’t have time to get there. He was a trooper today.